No one is ever ready emotionally for the death of a spouse. But you can prepare financially for the decision-making and reduced income you may someday face.

ONE PERFECT FALL MORNING IN 2012, Erin was waiting for her husband to return from dropping off their twins at preschool. He never came home—at the age of 42, he suffered a massive heart attack in the parking lot of the preschool. By the time Erin got to the hospital, he had passed away. At the age of 41, Erin found herself a widow with four children under the age of 8.

Losing her husband at such a young age places Erin in the minority—only 6% of the 1.4 million people who lose their spouses every year are under 441—but the shock and grief she felt are universal emotions that all widows and widowers experience. On top of her grief, Erin soon found herself dealing with such issues as filing for life insurance and her husband’s Social Security benefits, removing her husband’s name from their joint accounts and worrying about how she would plan for her children’s financial future—alone. Recalls Erin, “Beyond meeting our day-to-day needs, I was most worried that our children wouldn’t have the life that my husband and I had planned for them.”

“While older widows and widowers may not be burdened with similar concerns about their children's financial future, they often find themselves dealing with another serious consideration: Will they be able to afford the care they might one day need?” says Cynthia Hutchins, director of Financial Gerontology at Bank of America. This can be particularly worrying for those who've gone through a prolonged and expensive period of caregiving for their lost loved one—a situation many widows find themselves in.

To better understand this profoundly difficult—but for most couples inevitable—life event, Merrill partnered with Age Wave, a thought leader in the study of aging, to conduct research on widowhood and how this loss can affect the surviving spouse’s life and finances. Among the key findings: Men and women who prepare for losing a spouse fare much better in terms of stress and grieving, but a full 53% of current widows and widowers say they had no plan in place for what to do if one of them died.2

Plan Ahead to Help Your Spouse Manage Loss

The financial burdens that come with the loss of a partner are immense and immediate. Erin’s position as assistant headmaster for institutional advancement at a private boarding school gave her an advantage that few widows have. “I was fortunate that as part of my compensation the boarding school offered housing,” Erin says. According to the Merrill/Age Wave research, 60% of men and women who lose their spouses are immediately burdened by financial expenses, including housing costs such as mortgages or rent. The fact that 50% of those who lose a spouse also face a 50% reduction in income only compounds the problem.3

“Older widows and widowers often find themselves dealing with another serious consideration: Will they be able to afford the care they might one day need?”—Cynthia Hutchins,Director of Financial Gerontology, Bank of America

In addition to the financial demands, critical paperwork and decision-making begin their steady creep right away. The Merrill/Age Wave research showed that most widows and widowers—78%—describe the loss of their spouse as the single most difficult and overwhelming life experience. And two-thirds say that they had so many things to do, they were not sure where to even start. That’s when help from a knowledgeable professional can be invaluable.

For instance, in consulting with her Merrill Private Wealth Advisor, Richard Salvino, as well as Lilia Shemesh and Matthew Saland of her advisory team, Erin learned that decisions she made about managing the benefit from her husband’s life insurance policy could affect her children’s eligibility for future financial educational aid—a major need for her with four young children.

Only 14% of widows say they were making financial decisions by themselves before their spouse died. But once they are widowed, the overwhelming majority—86%—report having to do so.4 This is even more daunting when you have dependents at home. Research suggests that any financial decision that isn’t time-sensitive should be put off until you’re feeling less emotionally vulnerable. 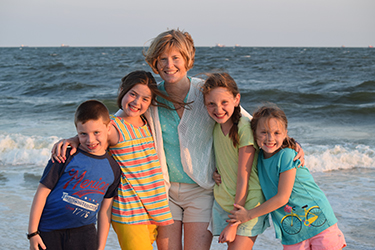 “The most difficult thing is the constant worry,” notes Erin, pictured with her children at left. “That started early on, and it continues nearly seven years later.” Over time, Erin’s advisor helped her work through issues involving her return to full-time work and saving for retirement. “We looked at all sorts of expenses and what decisions would need to be made in order to achieve the goals I had for the kids: what's realistic, what isn't, what would need to take place to achieve my family’s goals.”

Erin recalls that the day-to-day financial pressures were so great that she told her advisor she might cut back on what she was setting aside for retirement. “And he advised me not to—that retirement needed to be one of my first priorities so I could take care of myself in the future,” she says.

“Seventy-two percent of widows and widowers say they now consider themselves more financially savvy than other people their age, and that is empowering.”—Lisa Margeson,Managing Director, External Affairs, Bank of America

Salvino made Erin’s long-term financial health a focus. “Given that she was young, continuing to contribute to her retirement plan was important,” he says. “She had many years ahead of her to save and let the compounding effect of wealth work in her favor. You can always borrow for your children’s education, but you can’t borrow for your retirement.”

Amid all the pain and difficulty that losing a spouse brings, there is also healing. The Merrill/Age Wave research found that 77% of the widows and widowers interviewed said they discovered courage they never knew they had.

“They’re forced to jump into complex financial matters from the start of their journey and adjust to making financial decisions alone,” says Lisa Margeson, managing director of External Affairs at Bank of America. “In fact, 72% say they now consider themselves more financially savvy than other people their age, and that is empowering,” she says.

Gaining financial confidence can help sustain you through a difficult time. Erin’s private wealth team helped her stay true to her and her husband’s core priorities, she says. “They helped me see myself financially in a bigger picture than I could see myself. It’s been those discussions that have helped me the most.”

More for you icon

Age Wave is not affiliated with Bank of America.

Planning for life after widowhood: A guide to loss and finances

Due to COVID-19 and its impact on the current environment, the United States Postal Service is unable to deliver mail to certain foreign countries1. As a result, Merrill will be delaying mailings to impacted clients. Click here for additional details.